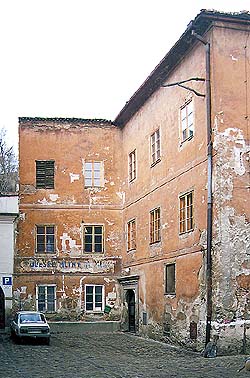 Description of the Building:
This is a sizeable building, originally consisting of two houses. The bigger one has two storeys, abutting on the mill race (and on the modern house at Široká No. 83), the smaller one has a recessed front. Its second floor is false with an attic. The fronts of both buildings are flat and without articulation. In the corner of the main building is situated an ostentatious Rennaissance portal with a cornice, decorated with ornaments of diamand shape in cresting. The rear elevation of the two-storey building has a high extension on the top. There is a wooden gallery on the upper floor of the one-storey building, situated in the direction of the river. In the main building are four semi-circular arcades, a narrow aisle along the edge, which used to be originally vaulted all across with cross Rennaissance vaults. Only one vault field has been preserved. The other sections have flat ceilings. The narrow aisle is inhabitable on the upper floor. There used to be mill equipment in the wide aisle created by wooden constructions. The one-storey building has three aisles. There are barrel vaults in the back part of the ground floor. On the south-east corner of the building a decorated diamant boss has been preserved.

Architectural and Historical Development:
The beginnings of the mill can be found in the 14th century, when the mill was mentioned by Peter I. von Rosenberg in his edict. There used to be probably a late-Gothic construction stage in the first half of the 16th century. A complete late-Rennaissance reconstruction was carried out in the years 1608 - 1611 (as in the house at Široká No.82). This reconstruction is documented in detail in historical resources. Several repairs and technical improvements were done during the 17th century. Another radical reconstruction of the building was carried out in 1780. Probably in the first half of the 19th century some repairs of the truss and the roof were done - two older saddle roofs were removed. In about 1880 a town gate, part of the fortification, was knocked down. It used to be situated between the house No. 80 and the opposite house No. 89. It was the last town gate to be knocked down (see History of Gates and Fortification in Český Krumlov).

Development of facade:
In the Middle Ages the building had already reached the first-floor level. Three phases of development appeared: In the 1st and 2nd phase the building was newly rough- plastered with the use of the grey-coloured paint, no tectonic articulation was discovered.In the 3rd phase, in 1546, the building was considerably adapted, neighbouring south building No. 79 was linked up.

The basic plaster surface was rough. The mill, Rosemberg family possession, was plentiful decorated. The tectonic articulation of facades was created by the rustic-work at different length, under-ledge frieze, window framing with black and red lines and diagonals in their corners. The wall surfaces were also decorated with rectangular-shaped disks with coats of arms symbols - Rosemberg family five petalled roses, emblems of the miller´s guild, "genre" paintings, date plate and inscription small tablet.

In the late Renaissance period, in 1608 - 1611, the facades were adapted only in a particular way, as opposed to the interior adaptations. The rough surface was replastered and a new portal was fixed, the tectonic articulation appeared only in fragments. In the Baroque period another coloured adaptation was done with the use of the white-and-grey-coloured articulation, in the Classicism period in the green-and-white-coloured articulation.

Before the half of 19th century the second storey was built on and the flesh-coloured hue was applied. In the earlier period the building was covered with a grey-coloured, green-coloured and "cinnamon-coloured hue. The plaster restoration was being done in 2002 (coloured adaptation was not finished), complicated by the floods.

The restoration of such an exceptional building should have been done in a more careful way. The medieval decoration is remarkable, we do not know the analogy of the corner rustic-work in any other buildings. 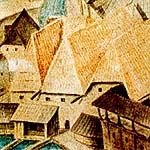 History of the House Residents:
The former tributary mill "below the castle" ranks the oldest buildings in Český Krumlov. It was mentioned in the edict (the basic privilege of the town) of Peter I. von Rosenberg in 1347. The land parcel No. 80 is mentioned as developed in 1514. In 1596 Peter Wok von Rosenberg gave up the tributary money for the benefit of the municipality, and the mill became town property. A large reconstruction was carried out in the years 1608 - 1611.

Mates Schemerle was the first town miller. The first emphyteutical miller was Antonín Postel in 1782. In that time the present house No. 80 was separated from No. 82 and other buildings on Ostrov. A weir, built from stone, belonged to the mill. Near the weir was a salmon trap which was rented by the municipality. The weir was damaged in 1830 by ice floes in spring. After 1850 the mill became private property. 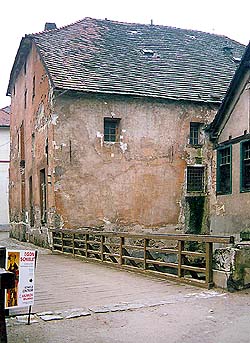 Stories And Other Interesting Information:
According to legend, the mill is protected by a water gnome who looks after pearl shells and pearls. Some people called him "The Pearl Mannikin". According to a fairy tale, his clothes are decorated by beautiful rainbow pearls. He sometimes let people look for pearls at the island. When someone wanted to find an especially big and beautiful pearl, he had to ask the pearl gnome. If somebody did not ask, he either fell in the water, or could not open the shell. Something unpleasant always happened to him or he lost the pearl.

Another fairy tale tells about the great financial difficulties of the mill. Its inhabitants became seriously ill. The miller´s wife could not stand it any more, and anxiously went to the river to find some fortitude there. Tears were streaming down her cheeks. Suddenly a small fairy appeared. She caught her tears in her apron and called, "Stop crying! Things are going to improve!" The tears changed into pearls and the fairy advised the miller´s wife what to do with the pearls. She must not have forgotten about the poor, who also needed her help. A short time after that peace and happiness returned to the mill.