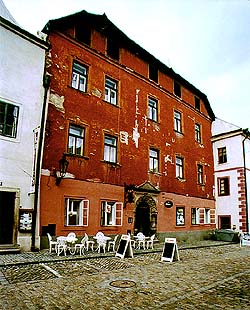 Description of the Building:
A two-storey house built on a wide land parcel. It has two perpendicular side wings which demarcate the yard. The side wings abut on the town wall in the back part of the land parcel. A ground floor extention between the side wings also abuts on the town wall. The main front of the house is flat, divided by five window axis. It has a half-gable which is shared by two saddle roofs which are perpendicular to the street. The window openings were renovated at the end of the 19th century. On the ground floor out of the axis is situated a unique portal in Český Krumlov, which is made of granite and is decorated with niches, equipped with seats. The layout of the house is a three-aisle, perpendicular to the front. In the middle aisle is situated a hall which is vaulted with ridged vaults with a circle in the top. Other ground floor sections have either flat ceilings or barrel-vaults of different types. Even some first floor sections and sections in the entire extent of the right court wing are vaulted. On the first floor of the main building is a hall with an ambulatory, vaulted similarly as the ground floor section. Rooms on the first and second floors have flat ceilings. The right court wing has two storeys and the left one has only the ground floor.

Architectural and Historical Development:
It is extremely complicated. The predecessors of the present house were probably two smaller houses from the Middle Ages. It is possible that the aisle on the left used to be a part of the neighbouring house no 76. The basic construction of the main building, the two court wings on the ground floor, the mezzanine, and the first floor, are probably Gothic. The right two aisles were probably built even in the 14th century. There were several construction stages carried out in the Rennaissance period. The most important one was probably in the years 1588 -1593, when the entrance portal was set and sgraffito decoration of the facade was made. The second floor was built in the first half of the 19th century. Further reconstructions were held in the last quarter of the 19th century. 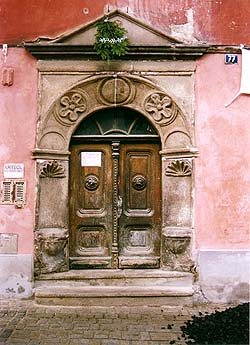 Significant Architectural Features:
The entrance granite portal with niches and equipped with seats, in the style of Saxon Rennaissance.

History of the House Residents:
The house belonged to a cooper Pavel Zbiják at the beginning of the 16th century. The first written note about the house is from 1523, when Zbiják´s widow sold the house to a maltster Jiří, who was called Schön Greg. She sold the house with a brewing vessel and other brewing equipment on the condition that she would be allowed to live there until her death. The new owner did not keep the promise and the widow Barbora died in 1536 in Krumlov hospital. In the years 1578 - 1587 the house was owned by a bookbinder Martin Gallus, who sold it to a butcher Jiří Roždˇalovský. In 1588 it was bought by an alchemist and manorial mine administrator of Wilhelm von Rosenberg, Michael Anton from Ebbersbachu. After the death of Wilhelm von Rosenberg in 1592 master Ebbersbach was put in prison by Peter Wok von Rosenberg. Peter wWok confiscated all his possesions. He gave the house No. 77 to his secretary Martin Šurer of Waldheim in 1593. He changed it in 1594 with Kryštof Albín of Helfenburk for house No. 4 in the square. Albín lived in the house with his large family to 1607, when he sold it to a hatter Konrád Köller. Between 1628 and 1644 there was a German school in the house. From the 1660s a dyer´s trade was run there, first by several generations of the Finks. The first of them, Tomáš, dyed cloth only in dark shades. In the years 1790 - 1806 a dyer Ignác Miko lived there, followed by a draper Antonín Riemer. The Riemers owned the house at least until the 1840s.

Stories And Other Interesting Information:
It is said that there used to live an alchemist who worked at the court of the last Rosenbergs, Wilhelm and Peter Wok von Rosenberg. Anton Michael from Ebbersbachu proclaimed himself to be a famous alchemist and scientist when in reality he was a fraud and charlatan. He squeezed money from the Rosenbergs and claimed that when he put the coins in the ground and water them with a special liquid, they would multiply and grow. He also promised an elixir of life and youth. According to legend he was put in the tower and he "pegged out as a dog" there. But it is not like that. He was followed, but he died in his house. He was then buried in a quiet corridor of a Minorite monastery with all the honours of a nobleman. He probably did not have a clear conscience, because he sometimes appears in the house walking here and there, sighing.