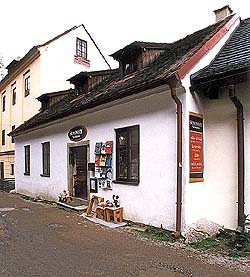 Description of the Building:
A one-storey house covered with a crosswise saddle roof with kilned roofing. The yard front is modern from 1927, covered with rough plaster with sunken lisenas and a string band. At the back elevation in the wall there are sunken-in windows, two on the ground floor and three on the first floor. The layout of the ground floor is a lateral two-aisle, partly vaulted. The first floor is also two-aisle but with flat ceilings in the entire area.

Architectural and Historical Development:
No historical notes about the past of the house have been kept. In a township map from 1826 the house is drawn only in the extent of its back aisle. The masonry of the upper floor, significantly thinner than on the ground floor, originated probably during Classicism. In 1927 a significant reconstruction was carried out according to the project of a bricklayer Stefan Sumerauer, which was presented and approved. The house became independent after a separation from the house at Široká No. 76 some time at the beginning of the 20th century.