Description of the Building:
Ground floor house from the street, one-storey towards the river.

Architectural and Historical Development:
The left third is one wing and shallower than the right part. This part is different in the facade too. Under the plaster were evident sgraffitos (today repainted). The layout has a semicircular barrel vault in the left part. In the right part are completely flat barrel vaults and rooms with flat ceilings. Also the floor has flat ceilings, except the room which is barrel vaulted with quinary lunettes. The left part of the building was created in the first part of the 16th century, the right part is from the Classical period (beginning of the 19th century). Further adaptations took place in 1962.

History of the House Residents:
The first known owner of the house was a tanner, Hans Schnabl, in 1576. In 1589 a currier, Jiří Höriczer, inhabited this house and, in 1597, sold it to František Aneis. Five years later he moved to the next door house, No. 9, which was, at the time, apparently a part of the house No. 7. Shortly after this the house occupied Hnans Mistelberger, and after him a widow after a painter, Marx. In 1606 the owner was a tailor, Kašpar Kunzl, and during the time frame of 1636 - 1654 Kryštof Dorn. Later a pasíř, Matyáš Zimpel, became the owner of the house and in 1670 was replaced by a shoemaker, Hans Lamel. 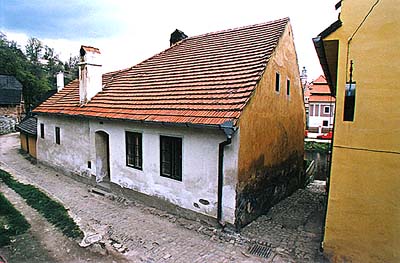 Next, in time frame of 1694 - 1746, the house was occupied by a painter, Petr Höfferle, and after him Pavel Wosowský. In 1785 Josef Schönbek owned it shortly and one year later sold the house to Šimon Bürger. From 1797 the house belonged to Martin Krausenekher. In the first half of the 19th century the house was occupied by Tomáš Koch, Havel Holzinger (1806), Albert Pechmanl 1816 - 1824, and next Josef and Marie Veitovi. Their family resided in the house until at least the 1840's. The occupations of the house residents in the 19th century were very different - they included a weaver of a linen fabric, a weaver of cotton, a clerk, and a disabled person. In 1929 an artist - painter resided in the house. 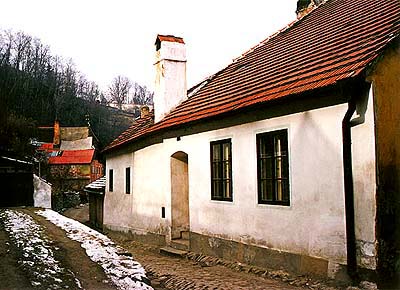