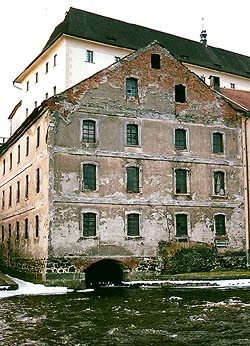 Description of the Building:
Two-storey mill building with a factory pattern facade and a gateway from the end of the 19th century. A mill-race is located under the eastern part.

Architectural and Historical Development:
The mill was recorded in a document issued in 1494. From the original building a part of the town walls was preserved. In the 1575 the price of the mill was 150 threescore of Meissen groschers. In the 19th century it was reconstructed, and at the same time the part above the mill-race was probably newly built. The interior construction of the building is wooden with joist ceilings.

History of the House Residents:
Recorded in a document from 1494 is Peter von Rosenberg conceding the city council to pursue a cereal mill for a certain enterprise which was then established in the castle moat. In 1515 and 1517 a miller, Dorota from Parkán, lived there. Before 1575 the mill was rented to Augustin, who passed it in an agreement to a miller, Václav, in 1575. He was allowed to run the mill until he died in 1582, when the mill was returned to the city. Václav was apparently paying for repairs to the house himself, because his inheritors, his wife Voršila and children Kateřina and Mates acknowledged on May 6, 1584 that they had been paid 76 threescore of Meissen groschers and no longer have any claims on the mill. In 1590\'s the mill was reconstructed, because in 1596 a new mill was spoken about. On November 29, 1752, the mill was sold with the grout grinder to Bernard Bayer. His family owned the house until 1821, when they were replaced by František Pinsker. Another owner of the mill was Adalbert Pisko, in 1836.

Stories And Other Interesting Information:
The story of this mill is that it was protected by a water-sprite. He was ugly but very kind to the people. On the salmon run, he helped everyone a lot. It is really a lovely story, full of the water-sprite\'s curious adventures which are not only about his tricks on the miller, but also on the other inhabitants living around the water