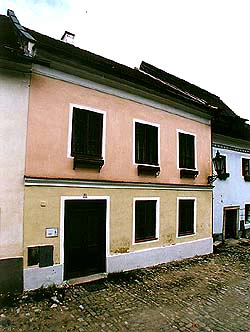 Description of the Building:
One-storey building with a neo-classical facade from 1871. It has a gable roof parallel with the street, covered by tiles. The rear facade is former town walls on the ground floor. The first floor was extended with a corridor.

Architectural and Historical Development:
The building was created in the late Gothic period by building onto the town walls. After 1568 the house was deepened. The present appearance is a result of a reconstruction in 1871, when the facade was redone.

History of the House Residents:
The first known owner of the house was Hans Jocher Prökl. He was replaced by a butcher, Michal Tanzl, in 1568. In the first half of the 1580`s a weaver, Walter Frölich, lived there. From 1584 until 1621 the house belonged to the Paumbhauer family. After that the house was occupied by Kašpar Winkler until the 1650`s. During the time frame of 1662 - 1700 a belt maker, Michal Weiss, resided in the house. We don\'t know much about the owners in the 18th and 19th centuries.

Present Use :
The building is not used at present. 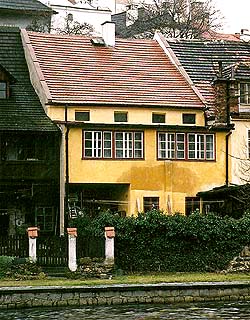