Náměstí Svornosti No. 9, Local name : At the Blue Horse (U modrého koně) 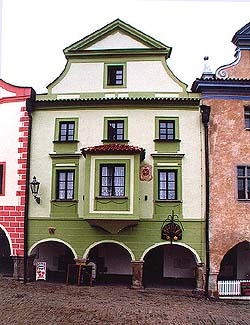 Location:
Náměstí Svornosti No. 9,
Local name: At the Blue Horse (U modrého koně)

Description of the Building:
This two-story building with Classical facade which dates from the first quarter of the 19th century has got a crown-shaped parapetted gable with triangular sections at its left and right sides. A Classical bay with barrel vault is located in the central axis of the first floor. The main front wall is horizontally divided by stringcourses. Three arches of the late Gothic arcade are located at the ground floor level. The interior of the ground floor is divided into two irregular tracts which were based on the original Gothic layout. The staircase is situated in the center of the building. In the center of the first floor there is a high entrance hall which is vaulted all the way to the level of second floor of the building. The cellars which are located under the back section and front left tract of the building are vaulted with stone barrel vaults.

Architectural and Historical Development:
The building can be dated to the Gothic period, from the beginning of the 14th century. The cellars and the core of the structure originate from this time. The exterior arcade and some of the vaulting inside the building on the ground floor are clearly from the late Gothic period. Notable reconstruction work was completed in the Renaissance period, between 1552-1589. During this period the layout of the building was reconfigured to its present day appearance, richly painted decorative work was created on the front facade wall, the right courtyard wing was erected and the rafters and chimney were added. The backyard courtyard area (which presently belongs to building no. 160) was also added to the building at this time. Classical alterations include the inscription of the date 1789 on the entrance portal, when the vaulted arcade was walled up. The building also acquired a new main facade with a more elaborate gable wall and a protruding bay and the second story of the building was added.. Further alterations were made in 1939 and 1943 when the vaulted spaces on the ground floor were remodelled to create a narrow hallway. From 1981-1985 the building was reconstructed.

History of the House Residents:
The oldest written documented owner of this building was Kříž of Kaplice in 1424. After 1500 the building belonged to the cobbler Mikuláš of the Square, who was an active member of the town council. Shortly before his death in 1525, Mikuláš sold the building to Václav Nyndertom, who bought it so that he would have a place to live out the rest of his days with his wife Kateřina. From 1532 the building was in the hands of the Tluk family and in 1568 there was a large fire in the building which burned the stalls in the back of the house during which Jan Tluk, also know as Veselý, lost two horses. After the death of Jan Tluk and his wife Zofia, the building was acquired by Wilhelm von Rosenberg, who transferred the building one year later over to the town with the condition that it served as an inn "as it had previously been". From 1625, the inn "At the Blue Horse" was located in this building, where according to records from 1654, they brewed beer and served both beer and wine. From 1796-1812 Antonín Langweil owned the building. Her son Josef, who was perhaps a draughtsman and graphic artist, then owned the building from 1812-1819. A brandy distillery was being used in the building in the year 1821.

Stories And Other Interesting Information:
Once there was a pub here called "U Anděla", where much mirth and merry-making went on, especially when the annual market was going on in the town. Once a bet was made in the tavern between two men who bet a freshly-bought heifer over who could drink two buckets of beer first. The one who won didn\'t get to enjoy his spoils for very long - he felt a bit out of sorts in the night and died. The poor soul then would appear to the tavern owner and chide him for not trying to talk him out of the bet. The owner had to hold holy masses for the deceased several times in St. Vitus\' church, and the man finally was able to rest in peace.