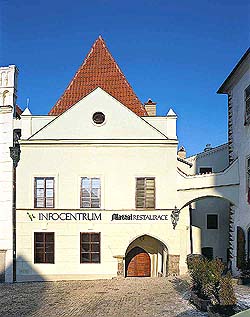 Description of the Building:
This one-story corner building has got a front facade which dates from the end of the 19th century. At the top of this facade there is a triangular gable wall which only partly conceals the high saddled roof that covers the main tract of the building. The wing of the building that is off to the right is covered by a lean-to roof. In the lower right corner of the building there is a pointed arched entranceway. An original Gothic load-bearing stone is well-preserved in the left side of this archway. The interior ground floor entrance hall is constructed with groin vaults. In the back section of this building there is a room with a richly carved Renaissance ceiling. The back, one-story courtyard area there are narrow rooms that have got barrel vaults with lunettes. The cellars are Gothic with stone barrel vaults. The building is connected with the adjacent, corner building Náměstí Svornosti No. 3 by means of a horizontal arched buttress at the level of the first floor which runs across the narrow alleyway.

Architectural and Historical Development:
The origin of this building goes back to the time around the year 1300, when two separate structures stood on this space. It has been documented that this building was one of the original structures built in the town. The building´s core, rafters, ceiling construction, and original vaulted Gothic cellars were all reconstructed in the Renaissance era, in the second half of the 16th century. The back courtyard annex was apparently added during the Baroque period. Approximately in the year 1876, the arcade was walled up and the entire facade was repaired. Other repairs to the structure have occurred at periodically until the present day. 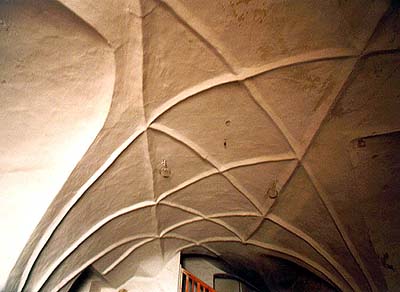 History of the House Residents:
In the years 1459 and 1463 the building belonged to a dyer named Štěpan. In the first half of the 16th century it was sold to the town clerk Václav Petrlík. He, in turn, sold it in 1550 to liege lord and eminent Rosemberg accountant Jindřich Vojíř from Protivec na Římově and his wife Anna for a high price of 360 Meissen groschen. Futher, more significant owners included the chief magistrate of Cesky Krumlov and Rosenberg accountant Jiří First, to whom the building belonged in the last decade of the 16th century. According to written evidence, a home brewery, which both brewed and served beer, was located in the building until 1654. The window on the back side of the building along Masná Street was, at that time, changed into a meat stand. In the year 1714, the building belonged to the castle court the court gardener Thomas Gerglen. The building caught fire in 1867 and in 1876 was transferred into the hands of the town council. The building served as an inn until the year 1948 and afterward a factory, and a kitchen for the military. Since the year 1963, a photo service shop has existed in this space.

Stories And Other Interesting Information:
This house used to be the location of the tavern "U Slunce". The tavern owner Jan was very untrusting and didn\'t trust the cellar-master of the brewery. He constantly accused him of filling his barrels only half full, and was always complaining at the brewery. To prevent the tavern owner from buying beer from someone else, he fired the cellar-master. The innocent man laid a curse on the owner, and soon afterwards the owner slipped on the stairs to his own cellar and was rolled over by beer barrels. His soul hasn\'t found peace in eternity, and occasionally he wanders the house.