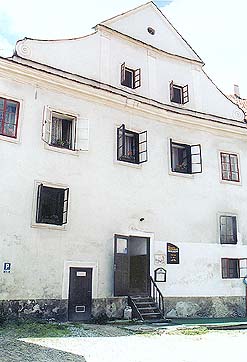 Description of the Building:
One-storey building covered with a gable roof. On the narrow western facade is a fractional Gothic portal with a skewed edge. A second analogical is by the entrance of the next room. Another Gothic portal, this time a gable with intersectioned consoles is on the main facade. The ground floor is on the level of the lower landscape and is accessible by a fractional portal. The original layout was preserved only partially. The entire ground floor has barrel vaulted ceilings. The rear facade on the ground floor level illustrates preserved former walls, and culminates in a rectangular gable with frontispiece and volutes.

Architectural and Historical Development:
The building is of Gothic origin and was created by adding to the city wall. The left narrow part maybe composed together with the wing of the next door house Masná No. 134 and individual house. A Classical reconstruction influenced the first floor layout and the facade. 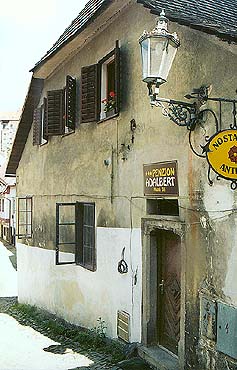 History of the House Residents:
The first known owner of the house was a butcher, Welffl (Wolf), who was replaced by another butcher named Pessu, in 1513. During 1517 - 1529 the house belonged to another butcher, Beneš. After him another butcher, Jiří Šimek, lived there. In 1575 he bought also the adjacent house No. 137. He owned both houses until he died in 1602 or 1603, when according to the last will, the house went to the Český Krumlov Clarissian convent. The convent sold house No. 136 to Matouš Zemperle in 1604 for 130 threescore of Meissen groschers. His family lived there until 1637. This year Petr Paumhauer moved into the house, and in 1641 was replaced by a servant, Petr Grampota. Four years later, Barbora Bachová acquired the house. From 1654 - 1811 the house was mostly occupied by butchers. The first one was Šimon Maráček, in 1658 Baltazar Kaltenhöffer, who was replaced by Regina Lorová, (born Kaltenöfferová) in 1678. During 1708 - 1720, Tomáš Alexander, resided in the house. After him, from 1720 - 1755, Šimon Stifte lived there. For the next five years the house was occupied by Josef Pfleger, and in 1760 Jan and Pavel Thaller moved into the house. In the first half of the 19th century the house belonged to Václav and Anna Mayer. They were replaced by Ignác and Josefa Eggert. After them came Josef Lechner, and they lived in the house until at least the 1840\'s.