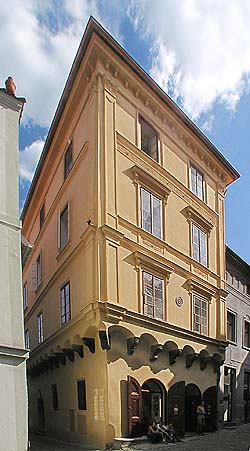 Description of the Building:
Three-storey building, adapted facade upon additional reconstruction and elevation. The top floors above the ground floor are lifted up on cantilevers, and the facade toward the street Radniční is decorated with lilies and maskarons. The entry is a late Gothic portal, and from the Masná street is a console type with a rich profile of intersected rods with diamond hobs. The building layout is in all elevations modern, and all areas have flat ceilings.

Architectural and Historical Development:
Originally it is a late Gothic building documented in the 15th century. It was adapted in Renaissance and completely reconstructed and elevated around 1840. Particularly significant building with a high level of late Gothic architecture common in the city. According to the personal memoirs of Dr. Richard Franz, the house once served as a chapel. This can be attested to by the presence of two stone heads situated on the side entrance from Masná Street. One of the heads represented the Savior, the other one Satan. The heads have been since removed.

Development of facade:
In the late Middle Ages period, before 1500, the building seems to have been built as a new building on the narrow plot of land with top floors on the stone corbels, in the older built-up space in Masna Street. The street front finished by a triangle-shape gable with corner plastic rustic-work reached the today´s three-floor level. The grey-and-brown-coloured paint, corner rustic-work and holes framing with a pointed up red line were applied. The front side among the corbels was decorated with coats of arms.


In the Renaissance period the rough plaster layer was pulled over by the smooth plaster with a white-and-grey-coloured scheme. Only a green-and-white and white-and-grey-coloured articulation appeared in fragments from the Baroque period. After 1865 there were some remarkable interior changes, and the main entrance with the portal was replaced into the side front. In 1870 all the level structures and window holes were rebuilt and the whole facade was covered with a red-and-pink-coloured coat of paint, later with an ochre-coloured coat of paint.


In 1939 the restoration was connected with the shop window construction and the use of an all-surface green-coloured coat of paint with the window holes framing in a darker hue. In 2003 the restoration of historical facade was done while the building was being restored. The new ochre-coloured paint was done by the lime technology. The facade discoveries from the late Middle Ages period have been kept covered.

History of the House Residents:
According to Valentin Rychlík`s last will from 1555, the house was devolved to the brotherhood of St. Catherine, from which a doctor, Tomáš Albín z Helfenburka, bought it. In 1562 Matyáš Tonner or Plankentoner acquired the house. After Ondřej Planka a goldsmith, Šimon Grünberger, moved into the house. In 1568 he was replaced by a druggist, Hans Gunstetter. Until 1604 Hans\' daughter, Anna Strupová, took care of the house, and after her until 1629 the house was inhabited by a kettlesmith, Kryštof Ulrich. During 1629 - 1647 the house belonged to a higgler, Mikuláš Placeda, who supplied his goods to the Český Krumlov castle. Until 1654 Erasm Fischer lived there, and after him, Kateřina Nitschová, previously Fischerová, took care of the house. In 1669 - 1677 the Český Krumlov mayor, Florián Alois Hürnig, owned the house. Until 1733 the house was occupied by a tradesmen, the first was Ferdinand František Schatz, followed in 1698 by Lorenc Walkaun. In 1733 Matouš and Alžběta Alt moved into the house. In 1747 the house was inhabited by the Adalbert Schröder family. In 1760 Martin Patzlt became the owner of the house and from 1785 until at least the 1840`s the house belonged to the Thaller family.