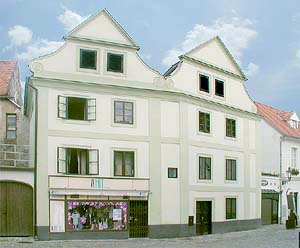 Description of the Building:
Three story house with a divided front and two volute gables.

Architectural and Historical Development:
There might have been a Gothic house (before 1500) adjacent to the Latrán gate on this plot, because the ground floor vaulting dates back to that period. During Renaissance, two houses were joined together and the seventeenth century gables were preserved. The front is subdivided by windows with stucco decoration around them. The house has an asymmetrical layout, are there are rooms with smooth-surfaced ceilings and rooms with vaults on the first floor.

History of the House Residents:
The first known owner of the house was a man named Hanuš mentioned as living here as early as 1541. Maltsman Štefl Langnittauf lived here sometime during the 1570s and 1580s. His family owned the house until 1645. At that time, another maltsman Lorenc Procházka moved in. Mason Hans Pfeiffer owned the house from 1690. There is no information available about the owners of the house during the eighteenth and nineteenth centuries. 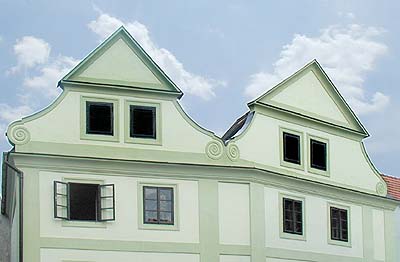 Present Use:
HIT shop - textiles and apartments on the second floor.