Description of the Building:
One story building with plain facade. There is a loft in the center of the longer side of the building. 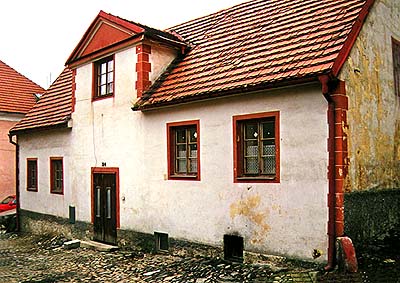 Architectural and Historical Development:
The house was built during the first half of the sixteenth century. However, the Renaissance spatial arrangement was greatly influenced by a reconstruction that took place in the beginning of the eighteenth century, as well as by Classicist and modern modifications. The space near the southern facade has a preserved Renaissance ceiling with a richly carved downstand beam.

Significant Architectural Features:
This Renaissance ceiling along with vaulted spaces is the most valuable.

History of the House Residents:
The first known owner of the house was miller Václav Rohan who died around 1600. The city council sold the deserted house for only 30 three scores of groschen to Ondřej Battory who at that time also owned the house Latrán No. 10 on the castle stairs and Latrán No. 15, where he lived with his wife Kateřina. In 1608, court carpenter Matyáš Kotter or Gőtter bought the house. Carpenter Řehoř Petersamb lived here between 1654 and 1662, followed by court gardener Jiří Spiess. His wife Alžběta managed the house possibly until 1700. Court rope-maker Valentin Wolf lived here from 1709, followed in 1729 by tailor Josef Reiter. Also the next owner - Jan Antonín Linka - was a tailor, and his family lived here until 1802. Joiner Jan Zettel lived here the following six years.