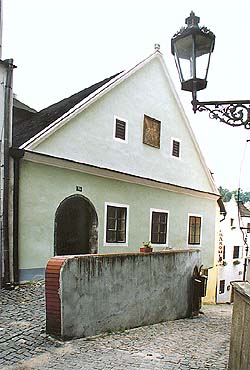 Description of the Building:
It is a two-level house with a pushed-out terrace from where you can enter the house from the steeply inclining Kostelní street. The front of the house is divided by three window axis with a broken Gothic portal with a skived edge on the left hand side. In the triangle gable, separated by a cornice, is situated a picture of St. Florian. On the ground floor on the left is a hall with a flat ceiling, on the right there is a barrel-vaulted section, and the narrow central aisle is vaulted with barrel vaults with lunettes and ridges. The back aisle and the right hand side section have flat ceilings. The first floor in the back aisle has flat ceilings, the central sections are vaulted with ridged cross vaults. The cellar of the house is situated along the town wall which has been preserved up to the level of the first floor. The house is covered with shingles.

Architectural and Historical Development:
History of the house reaches back to the 14th century. The present layout probably originates from the period of Classicism and partly from the devastating reconstruction in 1960.

Significant Architectural Features:
A broken Gothic portal at the front and the painting of St. Florian between the windows of the attic. 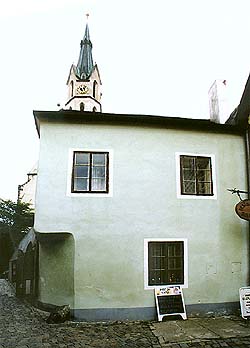 History of the House Residents:
At the beginning of the 16th century there lived a draper Matyáš, who was followed by a draper Tomáš in the 1530\'s. A draper Pavel, who moved here from the opposite house at Kostelní No.163, stayed there for a year. Pavel died in 1543 and the house was sold to a shoemaker Baltazar Schmidt, who lived there to the beginning of the 1590\'s. Baltazar was followed by a shoemaker Hans Weber from Dresden. In 1623 a weaver Ondřej Schütz shortly lived there, followed by a weaver Jiří Pannhofer. In the years 1651 - 1682 the house belonged to a maltster Šimon Höffer and after him a hammer-miller Jáchym Klauser moved there. From 1686 the house was owned by a wheelright Melichar Metzker. In 1694 a tailor Jan Reiter obtained the house and from 1707 a bricklayer Bartoloměj Schoper lived there. In the years 1743 - 1808 Antonín Leyer and Valentin Praxl ran a carpenter´s trade in the house.

Present Use:
The upper floor accessible from the terrace is used for living. On the ground floor is Souvenier Shop Pod kostelem.