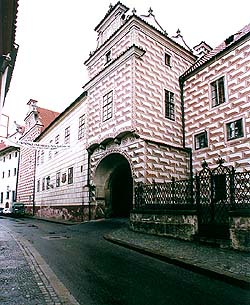 Description of the Building:
This once four story, now three story building has got a central floor plan that is built around a trapezoidal courtyard. The building is connected on its west side the to the oratory of the parish Church of St. Vitus by a short, narrow passageway and on its east side to the former Jesuit college (Horní No. 154). The building was built on an elevated plot which overlooks the meandering Vltava River. The majority of the original section of the building is covered with a gabled roof. The Neo-Renaissance north wall which faces Horni Street is divided up into three parts. The facade is covered by sgrafitto work and rose motifs and is dated from the year 1576. At the top of the facade, there is an historic, gable wall with Classical decorative work. On the left side of the arched entranceway there is a plaque which commemorates the prelate Jiří Bílek z Bílenberku (1588 - 1657). Above the arched entranceway, the first and second stories protrude forward slightly and rest on four stone corbels. The facades of the inner courtyard are sub-divided by piedroits. Three commemorative plaques are located in this courtyard. Across from the entranceway there is a marble plaque which commemorates Jan Frantisk Chvalenick , the prelate who lead the renovation project after the fire of 1665. On the opposite wall there is a brown plaque in the scrolled pediment that is above the covered staircase. This plaque commemorates the renovations that were made to the building after the fire of 1768, which were lead by the prelate Frantisek Kfeller, and whose emblem is in the upper section of the plaque. The third plaque, which is on the left facade, is beige and represents the reopening of the prelatory brewery which was a result of the work of the prelate Dr. Loberschin in 1865. The loggia with stairs and arcade are the products of Rococo renovations. The outside wall of the southern, two-story section of the building faces the Vltava River and has got remnants of three Gothic windows from the 14th century. One of these windows has got well-preserved stone tracery. In the first floor of the eastern wing, in corridor known as Prokysuv Hall, there is painted Rococo decorative work and a stucco medallion on the ceiling.

Architectural and Historical Development:
This Krumlov prelatory building is one of the most significant but also among the most complicated constructions and oldest buildings in all of Krumlov. The building originated in the Gothic period, in the second half of the 14th century. Late Gothic and early Renaissance renovations were made in 1576 by Balthassar Maggi. A prelatory brewery was built in the left wing in 1596 and was in operation until 1865 (see History of Brewing in Český Krumlov). Many of the numerous fires that took place in this building were caused by this brewery. When Baroque renovations were made after the fire of 1624, the first floor of the street side wing was built and connected to the main building. After another fire, restoration projects took place in 1652 and 1768. This later restoration project was lead by the same architect who worked on the Summerhouse Bellarie in the Krumlov castle. The alterations that were made to the prelatory include Rococo remodeling of the stairwell and the elaborate painted decorative work in the celebration hall, which was executed by František Jakub Prokyš. Further renovations were made in 1865. From 1897-1902, when various repairs were made to the building, the gables were returned to their historic Renaissance appearance and the sgrafitto on the front facade was restored. During a renovation project in 1904, remnants of Gothic windows were found in the southern wing. In 1924 further alterations were made and the building received its present-day appearance during a remodeling project in the second half of the 20th century. 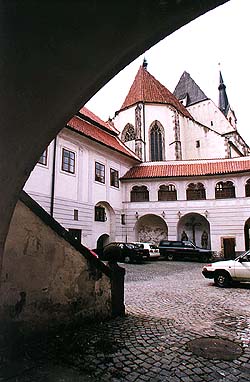 History of the House Residents:
According to documents from the year 1406, a priest by the name of Hostislav purchased two buildings in Krumlov so that he would have the materials with which he could expand the parish and build this prelatory. Up until the year 1443, the highest position represented here was that of a priest, but later the position of prelatory deacon was also located here. The most significant of the deacons who served in the Krumlov prelate were Jiri Bilek of Bilenberk and the Jesuit deacon Bohuslav Balbín, who wrote a book entitled Bohemia Docta (Bohemia Doctrine) which was kept in the prelatory library. At this time, the prelate also had a working brewery, where dark beer, and later wheat beer, were brewed. From 1763, when beer was also sold to Krumlov citizens in this location, a large portion of the profits from these sales was given to the town. The prelatory disagreed with this unfair system of taxation, stopped this business 1770 and from this point forward, beer was exclusively brewed for and served to the employees and members of the prelate. From 1782 the brewery was rented out. A forgery was also located in the building at this time. In 1611 the building was vandalized by a group of Protestants. These damages were very costly for the prelatory. In 1624 a new portion of the building was built along Horni Street. On the Morning of the Body of Our Lord, the 2nd of June, 1652, there was a large fire in the town, which was perhaps started by some children who were in the granary with their torches. Among the many homes that were burned during this fire was the apartment of the arch deacon. An even larger fire started in the prelatory brewery at two in the morning, on the 2nd of March, 1768. This fire damaged the entire prelatory and its neighboring buildings and the granary was completely destroyed. There was one period where the building caught fire six times in the course of twenty years. The original wooden prelate building with wicker ceiling, which had surprisingly survived a fire, got its present-day appearance after an extensive reconstruction project lead by Johann Franz Kfeller. 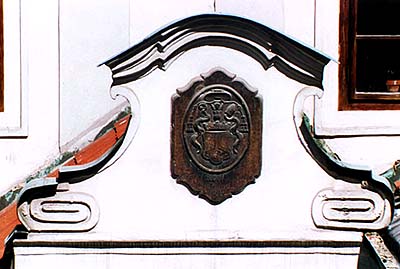