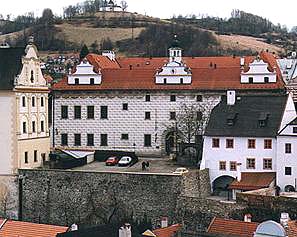 Description of the Building:
This extensive, two-story building has got four wings that surround a central, rectangular courtyard. The main facade, which faces Horni Street, is decorated with Renaissance sgrafitto. Murals of various Czech saints (St. Ludmila, St. Vojtech, St. Prokop, St. Vit, and St. Alzbeta) are painted in a band that runs just below the eaves. This decorative work was restore in the 1980s and 1990s. The entranceway into the courtyard is marked by a semi-circular arched portal of roughly-hewn granite. Above this portal there is a relief of the Rosenberg five-petalled rose. Incorporated into the roof of the building are three high attic gables, each of which is horizontally divided into three sections by cornices. Above the center attic gable there is a small tower. The facade of the building on the walls inside the courtyard are also decorated with sgrafitto, painted murals in the course just below the eaves, emblems of the founder of the Jesuits college, Wilhelm von Rosenberg and his fourth wife, Polyxena Rosenberg von Pernštejn, and the symbol of the Jesuit order "IHS" from the year 1587. Painted on the opposite wall of the courtyard, above the entrance portal, is an image of the Rosenberg rider, the coat of arms of Pernstein with a bull, and the year 1587. The smooth back wall of the building is decorated with a course of lunettes and a richly painted sundial. 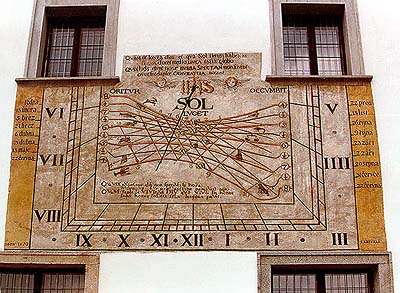 The southern terrace that is located on this back side of the building overlooks the town park and the Vltava River. Much of the interior space of the building contains barrel or cross vaults with groins. In the right wing, which was reconstructed in the modern era, a spiral staircase leads to the former theatre hall. The back wing of the structure contains six extensive rooms with tracery vaults, a central hallway and vaulted staircase. Remnants of two Renaissance fireplaces are well preserved in this area. The building is connected on the left to Horní No. 153 and on the right to Horní No. 155, the Prelature. Previously, it was possible to walk from this building straight through to the Church St. Vitus. The majority of the cellar space lies under the right side of the building. Some of the cellar space was carved out of the rock that lies beneath the building.

Architectural and Historical Development:
This former Jesuit college is a four-wing Renaissance building, which dates from the year 1586-1588 which was built on the plot of land where six Gothic structures once stood. The Jesuit building was built by the highly regarded Rosenberg builder, Baldassar Maggi of Arogna according to plans drawn out by P. Alexander, a rector from the Jesuit college in Prague. The first of the Gothic buildings were purchased for the Jesuits by Vilem of Rosenberg and the town council and demolished in February, 1586. In March of that same year, the setting of the first foundation stone was celebrated. The three-story building was (excluding the roof) ready perhaps earlier than September of that very same year. Labourers and craftsmen from Krumlov worked on the project. Beams and boards were brought to Krumlov along the Vltava River, woodcutters came from Rožmberk and Loucovice, 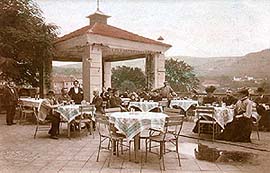 llimestone was brought from Chvalsin, nails, sheet metal and iron were transported from Freistadt by an Austrian named Cahlov. 16,695 glass circles were needed by glassmith Valentin during the making of the fifty-nine windows of the building. On the 16th of May, 1588, in the courtyard of the college, the then papal nuncia and other important people held an inaugural celebration where Vilem of Rosenberg handed the key to the building over to Jiri Bader and the rector of the Jesuit college in Prague, Alexander Vojtov. Well preserved from this period are the basic layout of the structure, the painted decorative work, the vaults and the ceilings of the interior space, and other various elements. The vaulting in the first two stories of the interior of the building and the in-house Chapel of Notre Dame, which was sometimes mistaken as a church. In 1591 the college was connected by a suspension bridge to the Jesuit garden on the opposite bank of the Vltava River, in the space which is presently the town park. This bridge collapsed during a storm in 1638. In 1663 a new passageway to the gardens on the opposite side of the river was built. This corridor was fifty steps long and was lit by eleven windows. It is claimed that even small carriages travelled through this passageway. The bridge was later sold at auction after the dissolution of the Jesuit order in 1773. A passageway in the rocky back side of the structure had the width of "four men" and lead from the college, behind the Prelatory, all the way to the parish church of St. Vitus. This was, however, out of use by 1601. 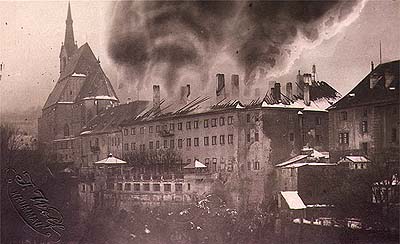 In 1773, after the dissolution of the Jesuit order, the college building was remodelled by Filip Holger into an army barrack. The bridge across the Vltava was demolished and the in-house chapel was divided up into smaller rooms. In 1889 the building was converted into a hotel. The facade of the building was restored to its original historic appearance and the staircase in the left wing was remodelled. Renovations were made to the right wing and to the theatre hall in 1906. After a fire in 1919 new rafters were built above the left and back wings. In 1921 the interior was divided up by separating walls. Further, significant renovations occurred in the 1960s. Restoration work completed in the 1980s and 1990s brought the building back to its original Renaissance appearance.

History of the House Residents:
The Jesuit college building was built from 1586-1588 on the plot of land between the rectory that is located in front of the parish Church of St. Vitus and the Horni Gate (the Upper Gate) where six residential structures had previously stood. Examples of some of the owners of these buildings include, a butcher named Jiri Rozdalovsky, tailor named Jakub Neumeister (who incidentally, owned two of these buildings that were adjacent each other), a blacksmith named Martin Mik, a metallurgist Rehor Singerspiler (owner of Horni no. 152 and no. 153, as well as, Svornosti Square no. 8), and butcher Martin Tancl (owner of Horni no. 153). 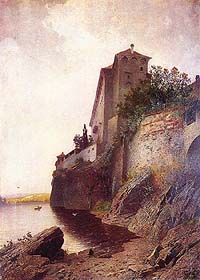 Though the construction of the building was roughly completed in 1586, the building was not occupied until the year 1588. At this time, it was possible to cross a bridge over the Vltava River to the gardens on the other side of the river. The gardens, where there were stables, barns and an open field, were purchased from the town by Vilem of Rosenberg. In the middle of the 17th century, a Baroque pharmacy which was available Krumlov citizens, was established on the ground floor of the building. The pharmacy was purchased by a Schwarzenberg knight for 3,000 gold coins after the dissolution of the Jesuit order. This collection is presently housed in the District Museum of National History. Jesuits remained in this building until the dissolution of the order in 1773. One of the more significant members of the order who lived in the building for a period was Bahuslav Balbin. After the year 1773 the building was used as army barracks. In 1887 a disagreement occurred between the town council and an army colonel named Sommer. Apparently the colonel was asked to bring his troops to Krumlov by town administrator Kraus, who promised Sommer he would be given an apartment in town. When Sommer and his troops arrived and the colonel was told that he would be renting a room that was located above a boisterous tavern called " U Stesteny" ("The Place of Fortune") he angrily left Krumlov and took his soldiers with him. After that, the building was auctioned off by Ceske Budejovice lawyer Adolf to a knight named Jungmann to the benefit of the Czech reserves. In 1889 the building was granted a license which allowed it to be used as a hotel and it was then that the building was inaugurated and given the name Hotel Růže.