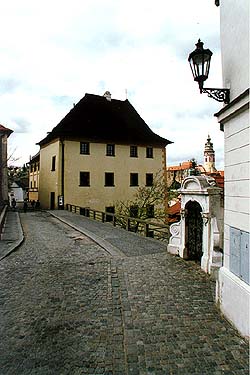 Description of the Building:
This massive, two-story, early-Baroque building has got an oblong floor plan. The main, west, facade, which faces Horni Street, is sub-divided horizontally by stringcourses and vertically by tall, pilasters created in the Tuscan order. In the spaces between the half columns, there are molded arches. This was at one time an open arcade but has since then, been walled up to its present appearance. The tall, scrolled gable wall has also been remodelled. On each side of this window, there are coupled pilasters, above which are two niches, one above the other, with a molded coquillege in each semidome. Decorative reliefs have been added to the very top of the gable wall. A high, pitched roof covers the building. The layout of the all of the floors interior are divided up into two tracts. On the ground floor of the south side of the building, there is a hallway which once opened up into the first floors. The rooms on the ground and first floors have barrel, cross. On the ground floor of the northern tract of the building there are two large halls on the outer edges of the tract and two large rooms between these halls. On the second floor there are flat ceilings which are decorated with square, stucco coffers. Parts of the cellars are barrel vaulted. 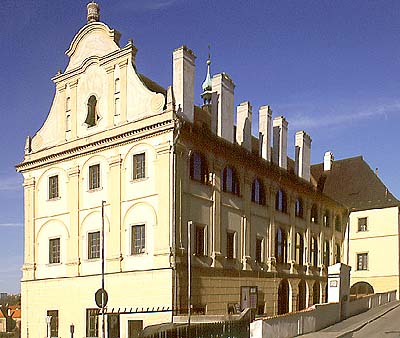 Architectural and Historical Development:
This building is situated in an isolated location on the rocky, wall that overlooks the isthmus that is between the narrowest point of the meandering Vltava River. After the Český Krumlov State Castle and Chateau and Church of St. Vitus , this building stands out as the third most dominant building in the panoramic view of Krumlov. The building was built by F.A. Golsts (although other literature mentions members of the family of builders Perti) in 1650-1652 on the plot of land where a section of the town fortification and six buildings from the Gothic era once stood. These six buildings, which were built on the right side of where the former Horni gate stood, were formerly used for the needs of the Jesuit seminary that was located in Krumlov at this time. They. Remnants of these original Gothic cellars are well preserved in the west side of the present day building. Each of the six original buildings were gradually purchased by the Jesuits from the original owners and renovated for their needs by the two Italian architects, Giovanni Batista and Antonio. Materials from demolished buildings were used in the adaptations of these structures. When the two-story construction was completed in 1652, it was then used by the Jesuits. In 1732 the seminary chapel of St. Joseph was added into the building and one of the wings of the building was widened. When late-Baroque additions were made around 1750, the gable wall was added and the decorative stucco work on the ceilings of the second floor were completed. The Horni gate, which stood between the edge of the southern wing of this building and the building across the street Horní No. 153 was demolished in 1839. The building underwent, at this time, reparation and alterations. The appearance of the building today is a result of a remodelling project from 1970-1979. 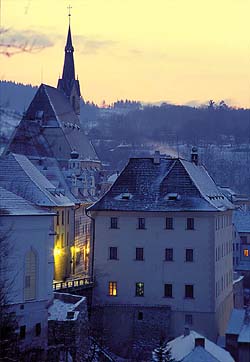 History of the House Residents:
On the land where the present-day building and the adjacent parking lot are located, six original Gothic residential buildings stood until the end of the 17th century. Each of the six buildings were gradually purchased by the Jesuit Seminary between 1590-1636 for various, unspecified uses. Well-preserved cellars still exist underneath the present-day parking lot next to building no. 151. The building had various owners throughout the 16th century. It belonged to a butcher Ondrasek, to his son-in-law Lukas Grubauer, then to a shoemaker named Franc from the year 1530. In 1539, an organist named Florian owned the building, then a tailor for the aristocracy named Jiri and after his son Jakub Neumeister, a furrier named Adam Fric was the owner of this building. Fric´s widow Vorsila passed the building over to Jan Albin in 1587, as a settlement of a debt. The building then changed owners four more times, the last of owner being Hans Ritter in 1638, who sold the building to the Jesuit seminary. The next building, in the series of the six, previously destroyed buildings belonged to a weaver named Ondrej and his wife Barbora in the beginning of the 16th century. After his death a shopkeeper, Lindl Maurer owned the building and after him, a tablemaker named Krystof Ramer. The list continues on until the final private citizens to own the building were a barrelmaker named Jakub Kaiser, also known as Cisar, and after him his son, who sold the building to the Jesuits. At the turn of the 15th century, the third building in the group of six was in the hands of a tailor named Vaclav and In 1580 a waiter named Leonard was the owner of the building, later various documented citizens, and finally, Zacharia Fleischander, from whom the Jesuits purchased the building in 1636. The fourth building belonged to the Svabovy´s and then to a stable attendant Zigmund Pytel. From 1578, the building belonged to a gold appraiser Rehor Singerspiler who moved into the building from building no. 8 Svornosti Square and who also owned a workshop across the street in building no. 153. His building and workshop were purchased by the town council in 1590 for the Jesuit seminary for a price of 600 three-scores of groschen. The fifth no longer existent building was first in the hands of a stone mason named Matej and the final owner was a barrel maker named Blazej, who sold the building to the Jesuits in 1590. The sixth building was purchased in that same year from the owner of the building at the time, furrier Vavrinec Bruderle. All of the six buildings that were bought by the Jesuits were gradually set up as either boarding houses or school. In the year 1649, the Jesuits decided that they wanted to build a new building for their seminary on this plot of land where the six buildings stood. Their plan to buy three buildings on Parkan Street so that they could demolish these buildings and use their materials to build a support system for the side of the building that was to be built was not, however, approved by town hall. Despite the fact that their request was not approved, the Jesuits went ahead with the construction of their new structure in 1651, without the materials from the buildings on Parkan, but ran into some difficulties when a large portion of the newly constructed building collapsed. Fortunately, no one was killed. Construction was finished in 1652 and about a year later the yard area for games was added. After the construction project had been completed, this building, now Horní No. 151, was then used as a boarding school. In 1693 over 70 people lived in the building, the poorer of whom received their room, board and schooling free of charge. After the dissolution of the Jesuit order in 1773 the building was used as German school from 1777. In 1787 a municipal school for girls was established. Here young girls learned how to spin, sew, and knit, among other things. Apartments for the director and teachers were also located here at this time. From 1878 until 1940 this building was used as various schools--the Krumlov gymnasium, a music school, an agricultural school, and as the archives. In 1940 the Krumlov school system gave the building to the town because it was in such a dilapidated state that it could no longer be used as a school. The next owner of the building was the county archives and the town of Krumlov after World War II. The building is used today as the Regional Museum of National History.

Present Use:
Regional Museum of National History in Český Krumlov