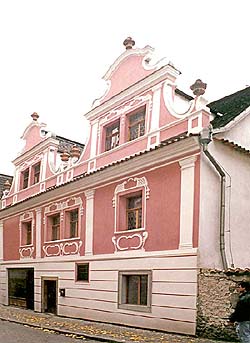 Description of the Building:
This one-story building with slanted terrace which is located above the old, town fortification wall. The wide street facade, which is broken up into four sections, is decorated with stucco ornamental work that is a result of Rococco alterations made in the third quarter of the 18th century. The facade is finished off by a parapetted attic wall with terracotta vases on top it it. This wall conceals the two attic chambers that are behind this wall, as well as, the tiled-covered, pitched roof that has got a ridge which runs parallel to the street. On the left side of the front facade, there is a shop display window that dates from the late 1920s. The building is separated from its neighboring building on the west side by a narrow alley. An addition in the courtyard area in the interior of the building has got segmeted vaults and is covered by a lean-to roof. Located on the ground floor, there is a ridged entrance portal with the initials IMIB and the date 1676. In the central hall, there is a straiwell which leads to the courtyard area, to the first floor, and to the cellar. The rooms on the first floor have flat ceilings, with the exception of the room in the north eastern corner of the building. This space has got oval vaults which are divided up by ridges into triangular segments. On the ceiling of the western part of the building (behind the space that is allocated for shops) there remnants of stencilled decorative work which dates from the 19th century. In the back shop there is a renovated Rococcoo stucco suspended ceiling which conceals the former wooden, joisted ceiling. The cellars space with either barrel or semi-elliptical vaults is divided up into an irregualr layout. One of these vaults was executed and left with its coarse, unfinished appearance. The second covers the cental space which opens up into an impressive semicirular arched space which then leads to the courtyard. The rooms on the first floor have got flat ceilings. The ceiling is the north western room is decorated with Baroque reliefs and the ceiling in the north eastern room is a wooden, joisted ceiling with encased beams. The center of the eastern part of the building is the space where the former scullery used to be. 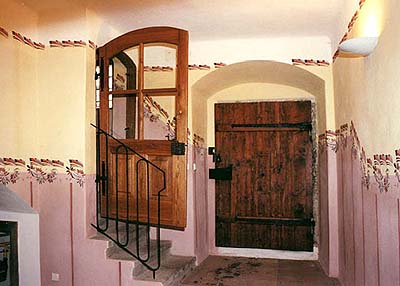 Architectural and Historical Development:
The original building can be dated to the Middle Ages. Major renovations were made in the 16th century, from whence we have the layout of the foundation, the arrangement of the building, vaulted rooms on the ground floor, and the courtyard. The Late-Baroque facade with Rococo alterations is limited on the side which faces the street and certain ceiling levels on the ground and first floors. This era is also associated with the construction of unique attic spaces, evidently built into an older Baroque ceiling. The 19th century brought several layers of patterned murals into the interiors. The staircase up to the first floor, including interesting patterned murals, was modified in the beginning of the 20th century, although they were completely destroyed during the last reconstruction. A shop display was installed in 1929.

Development of facade:
The form of the building is not known from the early Middle Ages period.The facade adaptation done in the Middle Ages, second half of 16th century, ranks according to its art conception into the late Middle Ages period. The facade articulation: the base surface was provided with a rough-smoothen white-coloured plaster layer in combination with smooth window frame surfaces, corner lizens, coats of arms with roses, cartouches with the year 1558, framed by a red line.

In 16th century (before 1591) the pyramid-shape graffito rustic-work was used in the front. In the Baroque period a head ledge was newly walled because of the bearings change of the roof, and the street front was adapted into the current form, the coloured articulation did not appeared. After 1763 the front was adapted, it means the first floor was articulated with pilasters finished by a head ledge, window holes were framed by band shams and decorated with sets of little bars with volutes, tassels and shell shapes, window-ledge fillings with palm leaves all over the sides under the windows, as it can be seen at present.

The fronts of dormer windows were decorated in a similar way, with volute gable extentions above the head ledges. The late Baroque period coloured articulation: pink-and-white, red-and-white, grey-and-ochre. The adaptation of the shop window in the left part of the building was done in 1929. The facade restoration was done in 1995. Unfortunately, the facade with an exceptional finding situation was damaged because it had not been kept in good repair for a long time.The complete restoration of the late Baroque articulation was done. The silicate paint was inspired with the historical late Baroque coloured scheme. 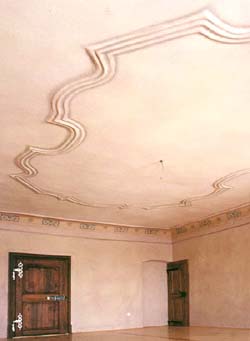 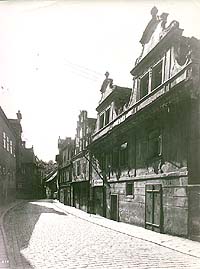 History of the House Residents:
In the beginning of the 16th century the building belonged toWolf Navar and in 1552, to a cobbler named Simandl (Zikmund), who died in 1543. During this time, the building was granted the right to brew beer here and therefore, this building was used as a brewery. Simandl´s widow, Marketa, and their sons Vaclav and Jiri Fridrich continue to live in this building. Their oldest son Petr ,was, at this time, out on his own making his living as a cobbler. In 1551 Simandl\'s son Vaclav got in a fight in front of the town hall with the Rosenberg clerk Vojtech Hultzsporer from Nové Hrady, who ended up killing Vaclav. The whole affair wound up in the court of the new ruler Wilhelm von Rosenberg, who showed mercy to his servant, stating that he is still young and undisciplined. According to his decision, Hultzsporer had to give dead Vaclav\'s mother and brother 75 three-scores of groschen. They were then supposed to divide this among the poor at their own discretion. For the sould of the murdered lad, he was to serve thirty masses. The las son of of Marketa Simandlova, Jan Fridrich, was early independent and the mother\'s house, now empty, was sold to the cobbler Pavel Mares. He lived here until the middle 1580\'s. In 1586, the guardians of Pavel\'s children, then orphans, sold the house to the wheeler Mates Satt. After 1590 the butcher Martin Tancl moved into the house, after leaving his previous near Horní brána which had been bought for the construction of the Jesuit college (Horní No. 153). In 1607 the house belonged to the cobbler Jakob Steuaf and his wife Apolena, after whom came Gregor and Apolena Tanzl in 1612. It seems that in 1638 Apolena established an "eternal interest" of 100 gold rynsky on the house in her will, which was to be paid yearly for the mass of the deceased from the Tanzl family. Another owner of the house was Lukas Frey of Tabor, who sold it in 1641 to his brother-in-law, butcher Elias Preybisch. From 1649 - 1652 it was reserved for the wards of the Jesuit college during its reconstruction. In 1654 the town council sold it back to Elias Preybisch for 500 three-scores of groschen. from 1676 the house was owned by the town\'s economic scribe Jan Michal Praun and from 1714 to another of the town\'s economic scribes, Bernard Schober. From other owners, we can mention the director of the Krumlov Archdeacon\'s estates Ferdinand Tomsch, who bought the house in 1763 for his son Modest, alias town council member Johann Chrin, to whom the house belonged until 1823. In 1868 the ground floor rooms were adapted for two shops. In the 1990\'s the ground floor was reconstructed into a restaurant, while the upper floors serve as residences. 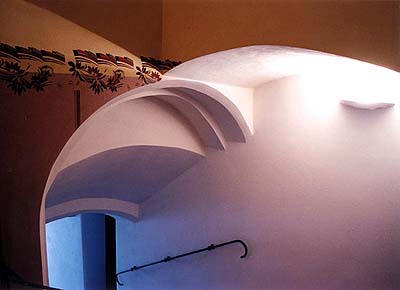 Present Use:
Ground floor Restaurant "U písaře Jana"
On the first floor are apartments.

Historical photograph:
View in the background of a portrait of Jan of Pernštejn from 1591 (Central Bohemian gallery, Castle Nelahozeves).