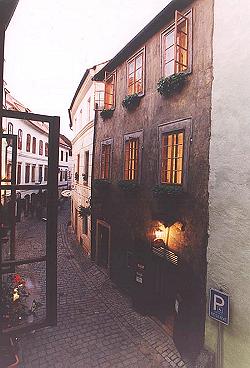 Description of the Building:
This two story building has a Baroque front facade which is divided up by stacked frames. The ground floor is set up in two deep tracts. The front section of the right tract has got barrel vaults with lunettes. In the left tract there is a hallway with stairs and a vaulted smaller room in the back section. The layout of the back of the ground floor is repeated on the first floor. The rooms in the front section of the first floor have got flat ceilings. One of the larger rooms has a ceiling which is decorated with stucco squares. The cellar under the front part of the building extends along the entire breadth of the building. The central wall on the ground floor is supported by columns.

Architectural and Historical Development:
The core of this building, the periphery of the side walls on the ground floor, and parts of the vaulting in the cellar can all be dated to the Gothic period. The layout of the ground floor was reconfigured in the Renaissance era. The cellars of both building no. 30 and no. 31 were created in the past as one singular object and the original barn was located at 19 Panska Street. The vaulting in the right side of the building and the dividing wall that separates that two tracts originated in the second half of the 16th century. After 1694, the new vaulted hallway and staircase to the first floor were created. The second story was added in the second half of the 18th century. Modernization of the building occurred around 1970.

Development of facade:
The medieval house unknown in greater detail was covered with a rough plaster layer and a grey-coloured coat of paint. During the Renaissance period the house, which used to be a part of house No. 30, had been decorated with grafitto. A hipped-pyramid shape rustic-work had had joints with an ochre-coloured coat of paint. During the early-Baroque period, in 1694, the house was separated and an additional storey was built. Gradually it was given a white-and-green, white-and-grey, white-and-brown-purple coloured scheme. In the late Baroque period window holes were framed with plaster plastic shams and three other colourful designs were ready to be implemented gradually: in white-and-grey and ochre-and-white (2x) colour.

During the 1st half of 19th century the restoration of facade form was carried out, as it can be seen today, with a reduced scheme of flesh-coloured-and-white, ochre-and-white, green and green-and-grey hue.Other green-coloured or green-and-grey coats of paint were uncovered in the parterre. A relatively quiet facade of building No. 31 has had an exceptional degree of preservation of its plaster and colourful housing in a town of Cesky Krumlov, which has been mapped and preserved almost in its entirety, due to the careful restoration work. 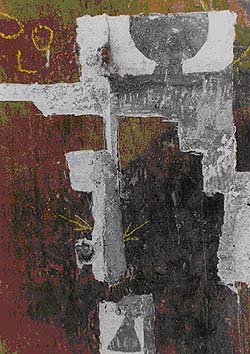 History of the House Residents:
A malt kiln was located in the cellars of this building (which extended under building no. 30) until 1695. At this time, the owner of the building Ursala Zeigerlova sold the building and the brewing and malting kiln to businessman Klaudio Juratov for 240 three-scores of groschen. In the last third of the 18th century a tannery was established here and after 1839, the building was used by cobblers.

Stories And Other Interesting Information :
Once, when a shopkeeper lived here, his son Walter had the bad fortune of falling in love with a beautiful gypsy girl named Marika. The whole town was outraged because Walter had, at this very same time a friendship with a nice and respectable Krumlov girl named Ruzenka. Hidden in the heart of the gypsy girl however, was betrayal. Her gypsy clan searched for pearls in the river by their camp outside of town, and she was to sell these pearls to the witch Annabelle. One day the gypsy clan left their camp and Walter, who was heartbroken, married Ruzenka, who loved him all along. Walter however, never forgot his gypsy girl, her passion or her love. He remembered her until death and confided these secrets to his son.