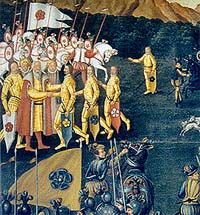 The Czech noble family of the Lords of Krumlov originated as one of the branches of the Vítkovci family. Vítek II, the son of Vítek z Prčice, is considered to be the founder of this family. A number of castles were founded in the Český Krumlov region by the allied Rosenbergs. The place of settlement of Lords of Krumlov was the Krumlov castle which was founded around the year 1253. The most significant representative of the family was Záviš of Falkenštejn, who headed the opposition of Czech nobility against the Czech king Poemysl Otakar II.. The last member of Lords of Krumlov was Wok who died without descendants in the year 1302, and the Krumlov castle together with the contiguous surroundings fell upon the Rosenberg branch of the Vítkovci family - Lords of Rosenberg. The Coat-of-arms of the Lords of Krumlov was represented by a green five-petalled rose in a silver field. 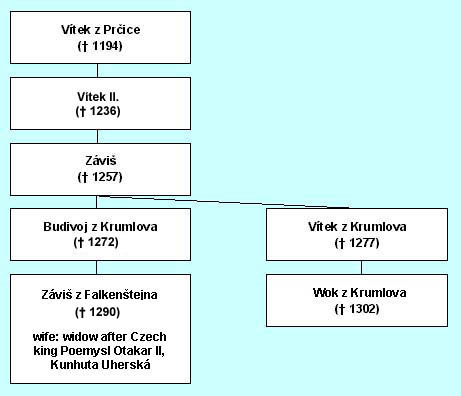