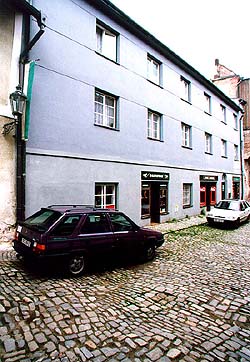 The oldest written mention of the existence of a meat market and therefore of butchery in Česky Krumlov is preserved in a document by Peter I. von Rosenberg from 1347. The meat market used to be situated mainly along current Masná street, i.e. in Masná No. 131, right behind the town hall. In order to own a meat shop, both local and strange butchers had to meet two requirements.

The first was to become a master, and second was to marry either a butcher's widow or a butcher's daughter, or to be the son of the butcher himself and therefore eventually inherit the shop. In those days, meat market looked more like just a counter or a wooden kiosk. As we can see on a drawing from the 19th century, the meat market was concentrated into a ground-floor building with a small lane in the middle that divided the space into two opposite rows with a total of 16 shops on the sides. Only a tiny space was thus left for the whole Masna street between the meat market building and other houses. Originally, butchers brought cattle to the meat market building, had it checked out, slaughtered it, cut it to pieces and sold the meat right away.

As is proved by a document by Jošt von Rosenberg from 1539, later the cattle was slaughtered in the so-called Šlachtáta (orig. from German: Schlachten = to slaughter; currently a slaughterhouse). Šlachtáta was situated by the river and was accessible from Radniční street through a gate between the houses no. 100 and 101. The cattle was slaughtered on a small bridge and the whole area was surrounded by a wall. 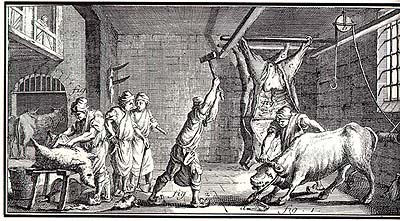 The location of the meat market and slaughterhouse right in the center of town complied to the needs for meat supply. As being concentrated in one place, it actually made it easier to control the quality and weight of the meat sold. However, the place was violating virtually all imaginable hygienic requirements. Further development of the place and complaints of the residents caused serious arguments between the Butchers Guild and city council. In 1883 the city council bought the meat market from the butchers, the old building was pulled down and a new one was erected in 1884 that consisted of six meat shops. The building was demolished in the 1930's and a new two-storied building, no. 131, was built up during 1938 - 1939. It does not come out of the written sources when exactly the slaughterhouse was pulled down. A new slaughterhouse began operating in 1914 in Špičák at Porák's bridge.