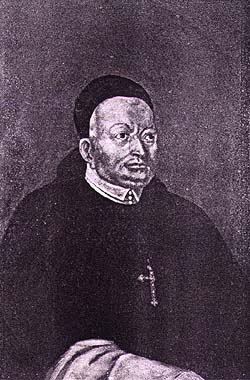 When he finished his studies and graduated with a doctorate of philosophy in 1654, he entered the Cistercian religious order in the Zlatá Koruna monastery, and in 1656 he was appointed a parish priest in the Mary holy place in Kájov that had been owned by the Cistercians of Zlatá Koruna from 1263. He could testify his abilities for the first time here. He renovated, improved and extended the dilapidating vicarage and church as well as revived the omitted Mary respect. His ravishing Czech and German sermons attracted lots of pilgrims. He was elected abbot of Zlatá Koruna in 1663, but he still came back to Kájov very often to served the Mary piousness. He finished the reconstruction of the monastery church in Zlatá Koruna, reconstituted a larger part of the Convent (the ruined monastery was still destroyed from the Hussite wars) and he increased rents in the monastery. He successfully fought in the restitution battle for the monastery properties against the Eggenbergs who were greedy sponsors of the monastery. In spite of the Turkish danger and a high war tax, Ungar was able to successfully keep monks in the monastery in exemplary discipline. Under his care the Zlatá Koruna monastery was a great example to all monasteries in the Cistercian province in the Český Krumlov district. The resident monks left for other Cistercian monasteries to hold high and significant posts (abbot or provost).