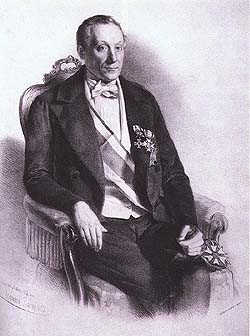 A native of Frymburk in the Český Krumlov region. The foundations of his education were inculcated upon him by teacher, choir director, and composer Johann Nepomuk Maxandt from Frymburk. He studied in Vienna, then in 1817 he was appointed to a professorship of physics on a lyceum in Olomouc. His first scientific works, published a few years later in Vienna, came from there. In 1823 he lectured at Vienna university, published his works as well as a Magazine of physics and mathematics, and wrote a book of elementary physics. He gained merit in the popularisation of science with his wide-ranging lecture activity, such as his Sunday lectures for artists, craftsmen and the general public. In state service he was entrusted with a series of positions, from running the C. K. china, glass and tobacco factories to heading up the Ministry of Commerce, Industry and Public Construction (1848). In 1846 he was entrusted with the management of constructing a telegraph line, and in 1846 - 47 he constructed and operated the first electromagnetic telegraph line running along the Vienna - Brno railway. In 1847 he was appointed court councelor, and in 1851 became the president of the Vienna Business Academy. In 1854 the emperor Franz Josef I granted Andreas Baumgartner aristocracy, and he finally retired on a pension in 1855. His memorial tablet in Frymburk was unveiled in 1996.