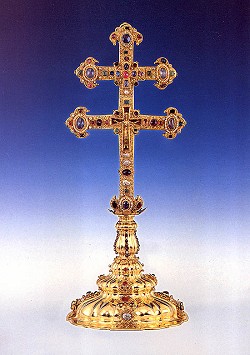 One of the Witigonen, ambitious Záviš of Falkenštejn, married a widow after king Přemysl Otakar II., Kunhuta, revolted against king Václav II. who let him executed on August 20 1290 in front of castle Hluboká nad Vltavou. Záviš is buried in a capitular hall of monastery in Vyšší Brod. Antonín Cechner writes: "Closer to the left side is in the ground granite desk, decorated by three five-petalled roses, under which according to tradition rests body of Záviš of Falkenštejn". His head is placed in the left wall. Tombstone description of Záviš's grave read even Bohuslav Balbín. I cannot quote here from Ladislav Stehlík's book Země zamyšlená(Thinking land): "In capitular hall I have been looking for place of the last rest of Záviš of Falkenštejn. His detracted body carried monks of Vyšší Brod from meadow near Hluboká to their monastery, buried it beside their abbots and head placed into the recess in this hall. They had for it their good reasons. Husband of the queen gave them really royal present. Tall silver cross, with world-wide legend". In year 1290 gave Vítek and Vok of Krumlov to monastery in Vyšší Brod "three villages for salvation of soul of Záviš of Falkenštejn".

Záviš's cross is the most uncommon piece of monastery's treasure. Legend says that Záviš of Falkenštejn received it from a former treasure of Hungarian kings during his marriage with sister of Hungarian king Ladislav. It is two-arm Byzantine cross 70 cm high and 28 cm wide. The original cross was tall 445 millimeters. Upper diagonal caber is 235 mm long the lower one just 280 mm. All arms expand at their ends into three-petalled French lily. "Outstanding beauty of this relic culminates in system of gems and giant pearls, placed in the groups at end of cabers and along them so their size and color coordination are just perfectly symmetric". Later on was into this cross added shank and Christ's statue.

Original cross is decorated by 44 gems and 166 pearls. Antonín Cechner writes that there are 174 pearls. It is made from silver with leaves of Arabic gold. Nine glazed lockets cover the relics. On each locket is painted bust of saint with his name written in Greek: Georgius Paulus, Thomas Georgcos, Petrus, Ionnes, Theologus, Demetrius and Athanasius. Karel Chytil writes that "each cabers and their intersections carry together 11 glazes of Byzantine origin from probably 10th to 13th Century". Front and back sides are different in way of their processing. Cross is due the value of used materials and a level of its artistic processing between the top relics in Czech Republic. Added golden plated shank with diameter of 28 cm is decorated with 39 gems and 31 pearls from Vltava river.

In 1810, when the state had its financial problems, "monastery was forced to put the Christ's statue away from cross and carry it into a mint, to transfer it to ducats". They had to return even an original pedestal of cross. In the nineteen Century was to cross given today's golden plated neo-rococo shank with gems and Vltava's pearls. According to "Rožmberk's chronicle" of Jakub Novohradský and Mikovec gave the cross to monastery Záviš himself. "Záviš's cross used to be carried in front of procession on pole in Vyšší Brod and Krumlov because it contained wood from the real Christ's cross". Vosel says that this cross gave to monastery in 1412 Jindřich III. of Rožmberk, what seems to be more probable. When was all possession of monastery nationalized on October 14th 1949, became beautiful Záviš's cross a part of treasury of St. Vitus cathedral at Prague castle. After November 1989 and return of monks into their monastery in Vyšší Brod returns cross with them.