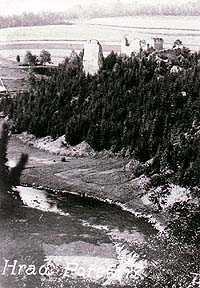 Location :
The ruin of the little castle of Pořešín is located on a narrow thickly wooded headland of the left riverbank of the Malše river about 7 km to the north of Kaplice.

Origin of the Name :
The name of the castle is derived from the Christian name Pořeša so the name means as much as Pořeša's castle or Pořeša's yard (in the German language Poreschien).

Architectural and Historical Development :
The little castle of Pořešín is a very interesting rarity of the South Bohemian castle architecture of the 14th century. In contrast with other castles that were proud of a impressive residential tower surrounded with the palace buildings, the key-point of the defensive elements of the Pořešín little castle is the jacketed wall which is a characteristic detail of the Moravian castles. The best access to the castle ruins is from the village of the same name through an old probably former castle way that slowly goes down along its south-west side to the Malše river. The entrance to the inner part of the castle was protected apart from two barbicans also with three wide crosswise moats. These moats allowed entrance to the castle only from the north-west through the main tower gate. The remains of this gate are still visible. The way of access continued through four gates located in the jacketed walls of each barbican. But only the one in the second barbican was preserved. On the opposite side of the headland, opposite of the main gate, there are the ruins of the only residential building, a two-storeyed palace, that was divided with a crosswise wall into two parts. Today we can see only the north-east part of the palace that is situated on the barbican, and also side walls. The whole outside wall together with the jacketed wall is in ruins. Also from the other palace only the ruins 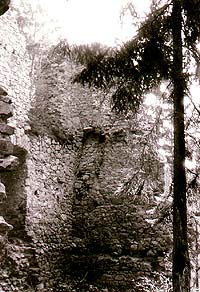 of the wings were left. Today the ground floor is buried under ruins but it is still recognisable, that the rooms in the upper floors, which were the main residential rooms of the castle were accessible from the courtyard by a wooden built-on gallery, that was destroyed a long time ago. These facts are proven also with the remains of a fireplace on the south-east side wall of the palace. Several smaller rooms were placed above the main rooms.

History of the Place's Residents :
The castle was probably founded by Bavor III ze Strakonic on the turn of the 13th and 14th centuries. Already around 1315 Bavor passed on the Pořešín estates to three brothers Vernéř, Racek and Přibík z Vitějovic who were progenitors of the lords of Pořešín. The lords of Pořešín as well as the Bavors had an arrow in their coat-of-arms. When the lineal branch of chieftains of Pořešín died out with Markvart z Pořešína at the beginning of the 15th century, the estates were passed over their relative Hroch z Maršovic. Around 1434 his offspring sold the castle to Ulrich II. von Rosenberg. Ulrich was afraid of Calixtins and did not want them to capture the castle by force and that was why he ordered it destroyed. Since then there were only ruins on the place of the former castle.

Tales and legends :
A huge stone above the Malše river has on its top a pit where the robbers living in the Pořešín castle washed away the blood to enter the castle with clean hands. The stone was called the bloody bowl. A master of Pořešín together with his robber band attacked merchants´ couches on the trading path to Austria. The legend says that when the Pořešín castle was captured by force the robbing knight was hanged up on a wild pear tree, but it also was said that his head was cut off beside that bloody stone and it was thrown away to feed crows. The knight of Pořešín has to walk around the ruins of the castle every night because of what he did. Once a young herdsman came to the castle ruins to find a treasure. A frightful monster of a woman appeared in front of him and she advised how to free the spellbound knight and get the treasure. When the herdsman did nearly everything that he was told to do he suddenly heard a voice behind him telling him that his cattle is in a wheat field. Because the young boy cared about his work, he forgot his mission and turned back. It was all up at the same time and the knight was not freed and the treasure remained in the same place as before. The curse could be cancelled only by children who were dandled in a cradle made of a wood of three lime trees growing in the village. Some farmer planted three lime trees but he made wash-tubs of them so the knight of Pořešín still waits for his freedom. 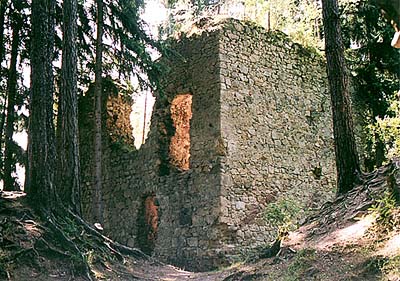