Stations of the Cross in Frymburk 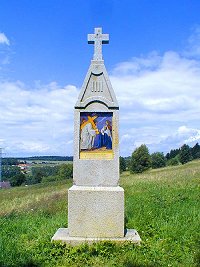 On the hill whereupon Frymburk, which used to be called Marterberg and which is now named Marta, used to stay a chapel with statue of Crucified, which was a private property of Frymburk's citizen Bartoloměj Mugrauer. He owned in Frymburk building No. 76, and as he died on 29. September 1890, he left a last will with legacy of eight hundred gold coins to build the new chapel. This aim was handled by the second Frymburk padre Bennet Sobotka, who has been working here in years 1892 till 1901. With agreement of cloister in Schlagl he formed a collection. Community and two Frymburk townsfolk gave a piece of land and almost every Frymburk citizen contributed for building of new chapel by financial amount or work.

The old Crucified's chapel had been till 30. June 1897 demolished and old statues have been after corrections taken to the village chapel in Kovářov. Building plan of new chapel on Marterberg made Frymburk builder Andrew Wagner and on "8. July 1897 the buildings of new chapel started". The whole construction of new chapel Hohe Marter, then High suffering, cost perhaps two thousand golds, from which "a smaller half was covered from collections of parishioners and for the rest paid cloister in Schlagl". In autumn 1898 was chapel finished and upon an entrance from inside was displayed a shape of original chapel. Statues for new chapel were obtained from Tyrolean Groden and according to drawing in parish chronicle it was a group of three statues with the Crucified amid - Calvary. Inside of new chapel High Suffering were placed the Stations of the cross from Šumava pictures painted on the glass. František Frantál wrote, that "paintings on glass came from not far off wooden chapel". This information isn't however stated nor in parish memorial, nor in German municipal chronicle. Chapel was solemnly consecrated on 13. October 1898. 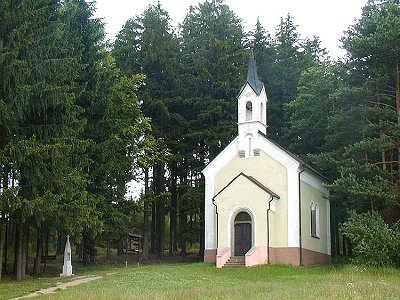 The first and decisive impulse to build the Stations of the Cross in Frymburk parish gave landowner from Lipno Adalbert Donauer, who at the beginning of ninetieths of 19th century paid six hundred of golds "for granitiform Stations of the Cross". Then in Frymburk cost, only for notion, accommodation for one night and all-day food just two golds and kilo of butter only one gold. Stations of the cross lead from Frymburk cemetery, which was flooded during building of Lipno dam, to top of Marterberg, where then stood a private chapel of the "Crucified" owned by Frymburk citizen Bartloměj Mugrauer. Magistr Frantál correctly presented, that "thanks to care of padre Isfried Hilber was in the year 1894 built the Stations of the cross". His further data about these Stations are however inaccurate, so I excerpt from Frymburk parish memorial: "Carving works executed Jordán Wiltschko from Hořice. He got for each station 26 golds. The Stations were painted by painter Hunčl from Linz, which received for each painting ten golds".

As far as were spent the whole 600 golds from gift of Adalbert Donauer, then 364 golds cost stone-carving works and 140 golds were paid for painting. Rest of 96 golds, was evidently spent for transport, field-engineering and plantation of single chapels and pictures. Procession at those Stations went three times a year the until transfer of German in the year 1946. In years 1947 till 1950 were here just one procession a year. How shows the Czech chronicle: "was damaged and later virtually destroyed chapel of Sorrowful maiden Mary High Suffering, newly called Marta (in Czech language the German title Hohen Marter) for search of fabled treasures. As well the stations of the cross leading to it were harmed, as well as many crosses and Divine sufferings everywhere around". It was "finished" by arresting of Frymburk's Father Josef Kříž toward the end of August 1957 and prohibition of performing the spiritual administration. Josef Kříž later wrote: "I don't feel a hatred to anyone, just gratitude to God. Gossips in Frymburk after my arrest, that I had a secret transmitter and contacts with foreign countries were desolate fictions". 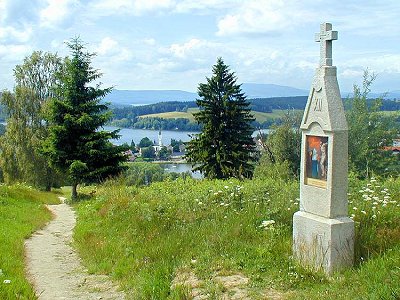 During service of Father Karel Prokop Švarc: was developed an endeavor to save a chapel High Suffering. There was repaired roof of chapel, but interior of it was considerably harmed by unknown vandals". Dilapidation and gradual demolition went on until the year 1992, when the chapel was chapel not only saved, but also restored by Frymburk construction company FAO. The entire renewal of Stations of cross followed led by municipal office in Frymburk and an effective help of former parishioners led by Herbert Foissner. All exacting work ended by consecration of the Stations of the cross on Saturday 24. June 2000.