Description of the Building :
Two-storey building with a smooth facade that was possibly created during the Renaissance period. The rear part with a terrace is apparently younger. The building doesn\'t have a high historical value.

History of the House Residents :
The first known owner of the house was a court tailor, Pavel Piener, who was in 1575 replaced by a belt maker, Linhart Saumer. Other owners of the house include Lorenc Zimmermann in 1584, and after him Benedikt Ruprecht, both belt makers. In 1683 - 1641 a butcher, Klement Valenta lived there with his wife Voršila. For five years the house belonged to a shoemaker, Kryštof Hölz, and from 1646 a belt maker Kryštof Ruprecht resided there. A shoemaker, Kryštof Höltzl, resided in the house from 1666 - 1673. In the 1670`s a tradesman, František Ferdinand, and a turner, Jiří Payer, lived there. From 1752 until the beginning of the 19th century, the house was occupied by Pofferl family, and the members of the family were millers and crouppers.

Present Use :
Textile and shoe store 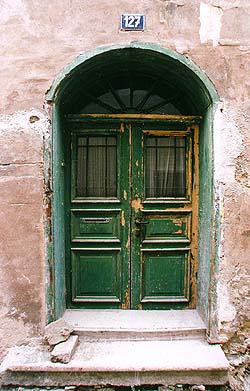