The Rosenbergs ranked among the most significant, venerable, noble and influential Czech noble families. Their members held posts at the Czech and imperial court and so went down in the history of the Czech state in a significant way. The emblem of this family was represented by a red five-petalled rose in a green field which is still often seen in a considerable part of South Bohemia. It was the Rosenbergs who influenced to a great extent the appearance of South Bohemia (see The Rosenberg Coat-of-arms). 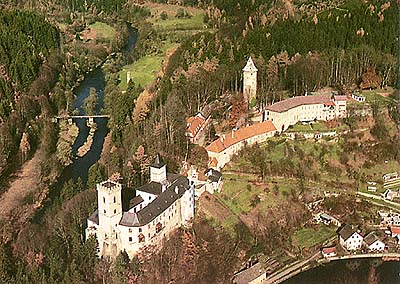 The founder of the family was Vítek III, the son of Vítek z Prčice. The Rosenberg thus originated as one of family branches of the Vítkovci. The family residence, the Rosenberg castle, was founded around the year 1250 by Wok (1262) who was also at the establishment of the monastery in Vyšší Brod in 1259. After the Lords of Krumlov died out in 1302, Jindřich I took over the Krumlov castle as well as the whole property of the allied family branch and he transferred the family residence to Krumlov. 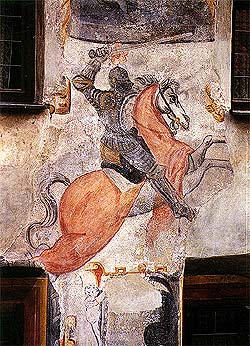 The Krumlov castle thus became the residence of the Lords of Rosenberg for the next three hundred years. Peter I. von Rosenberg held the post of the superior chamberlain at the court of John of Luxembourg. His wife was a widow of the Czech King Václav III. - Viola Těšínská. His oldest son Jindřich perished together with John of Luxembourg in the battle of Crecy in August of 1346. Another significant personage of the family was a son of Oldřich II. - Heinrich III.von Rosenberg who lead the Union of Nobility, which was displeased by the reign of King Václav IV. The Union of Nobility therefore imprisoned the king in 1396 at the castle in Český Krumlov. Heinrich's son Ulrich II von Rosenberg belonged to the Czech members of the nobility who defended the interests of Czech Catholic nobility and of Sigismund of Luxembourg during the stirring times of the Hussite wars. A daughter of Ulrich II was Perchta von Rosenberg who is identified with the Rosenberg "White Lady'' (see Tales of the White Lady). The renowned personage Peter IV. von Rosenberg meant, for the Rosenberg dynasty, the development of economic activities (namely fishing and the mining of heavy metals), the beginnings of humanism and the Renaissance, and especially the affirmation of a significant position of the Rosenbergs among leading Bohemian families. 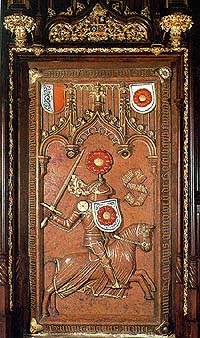 The decline of the family of Rosenberg is linked with Wilhelm and Peter Wok, the sons of Jošt III, who were brought up in the guardianship of their uncle Peter V. Wilhelm von Rosenberg was indisputably the most significant representative of the family as he made Český Krumlov the centre of cultural and political life. After his death in 1592, his younger brother Peter Wok von Rosenberg assumed the reign. In 1601, he was forced to sell the Krumlov castle to the Emperor Rudolf II of Habsburg. Peter Wok transferred his residence after the sale to Třeboň where he died in 1611. Peter Wok brought to a close the three-hundred-year-long history of one of the most influential Czech noble families - the Rosenbergs. 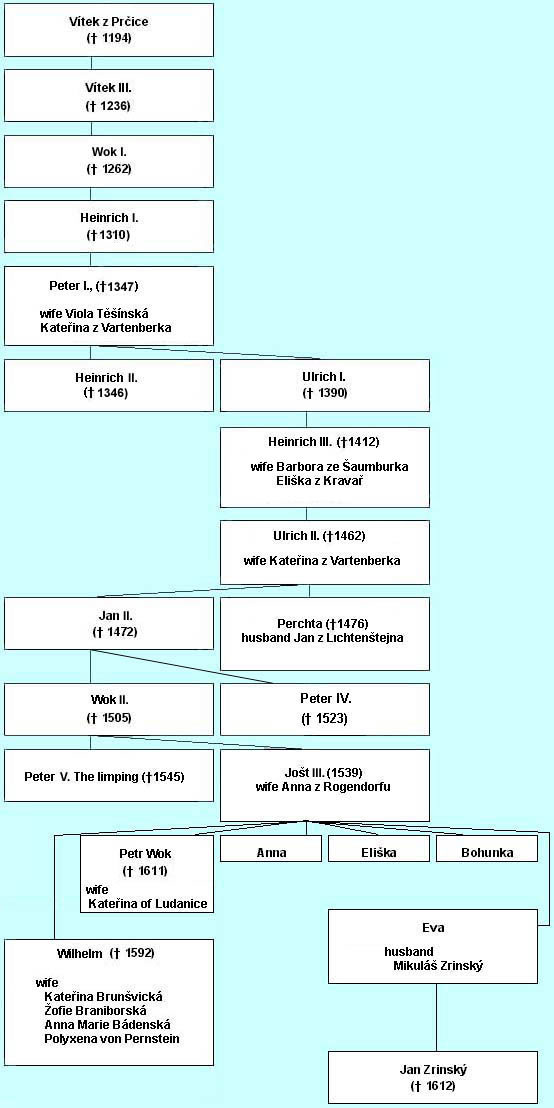 Further information:
The Settlement of Vyšší Brod and surroundings in second half of 13th century
The necropolis of the Rožmberk family in Vyšší Brod monastery